The objective is simple—heard the groundhogs (and later, snakes) out of their holes with your RC car. The RC car has three potential payloads—dynamite, a boom box, and a sand bag. The animal movements are technically random, but biased toward the tiles of least threat. They avoid the sky, the bottom of the screen, your RC car, the boom boxes, and the dynamite to varying degrees.

So yeah, basically you're groundhog herding.

It's an old idea I had, which turned out to be the perfect approach to the Godot 2MB-or-less game jam. This was made with Godot 3.1, on GLES2. In fact, the source is only 105.4 kB, and I haven't even cleaned up my code yet. The secret?

This game is, literally, almost asset-free. The only realistic exception is the default icon, which is 3.4 kB if you're keeping track. (I suppose I could've done without it.) The graphics are all from in-engine vector drawings, and the sounds are procedurally generated with a model of an old Motorola NES-style synthesizer. (At least, I think it was Motorola.) I didn't remove the icon file, and I could probably slim the source down further, but I think my point has been made about procedural art.

If this gets enough attention, I may come back to it later and add a few new payloads (cement? water hose?), animals (rabbits? tarantulas? centipedes?) and maybe buff the physics down a little (locate those occasional physics-processing needle-skips, and maybe add fluids, breakable rocks, and other things). Right now I'm just going through my checklist and producing a base for every game idea I've got.

I'll be holding a poll on my Patreon page in the not-too-distant future. Contributions are welcome, but hardly necessary. 'Till then, enjoy! 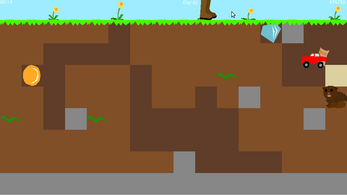 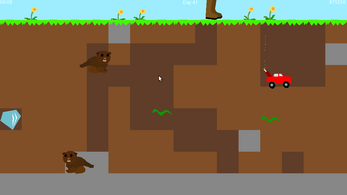 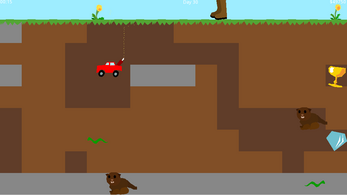